I love railroad worker's stories. This is Vallorie O’Neil's story in print and in video.

Posted by Boomer Hoghead at 5:07 PM No comments: 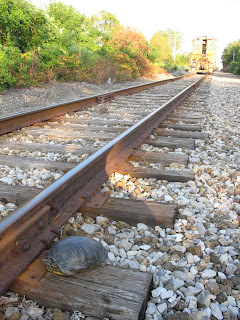 With a little help, this turtle did make it across the tracks.......
Posted by Boomer Hoghead at 9:00 AM No comments:

Email ThisBlogThis!Share to TwitterShare to FacebookShare to Pinterest
Labels: turtle