I spent many nights riding around in LTEX 1420 before it went over to the CVSR.   A decent little engine when it is dry outside and a little slippery when the rail is wet.  The heater on the fireman's side only blows out luke warm air.  Nothing is perfect, but you make do.  Our freights were getting longer and heavier.  Soon, the 1420 would be displaced by bigger units.  Now surplus to us and the CVSR in need of power, the 1420 was prepared for shipment.  Now on the CVSR, that little engine gets to handle passenger trains at 29 mph and that newly welded rail.  I still run 1420 from time to time on the CVSR. I have many memories of those night trips I made on the 1420.....
Posted by Boomer Hoghead at 12:06 PM 1 comment: 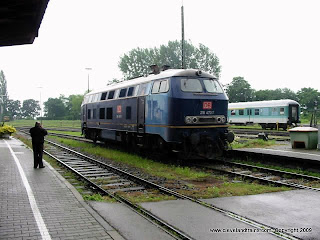 Back in 2001, I went to Germany to study and learn some computer stuff. Now a trip anywhere is not complete without foaming. I was somewhere in Germany switching trains when I snapped this picture of this German foamer. He saw me with my little camera and tried talking to me. We just ended up pointing at each other since we had no real way of sharing our train thoughts.

When I walked into this coach, I got really excited. This reminds me so much of my family's first Amtrak trip years ago. The red seats, brown carpet and orange curtains. It even had that old heavy duty oil mixed with must smell. The only thing that is missing is a pair of F40 units......

Posted by Boomer Hoghead at 10:33 PM No comments: 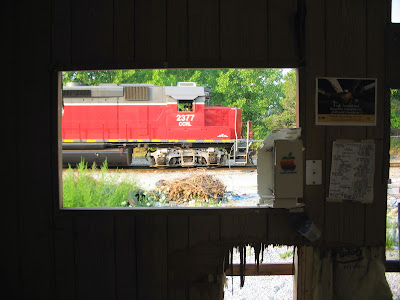 Cleveland is the city where I'm from. Born, raised and schooled; more than one way. Once a midwest powerhouse. Factories used to run three shifts. Fisher Body, LTV Steel, Kirby, Ford, Chevrolet, Sherwin Williams, the list goes on. Some are still here, barely. Huge empty fields serve as reminders of the once mighty powerhouse. Jobs started to go away. No work for the people, Reaganomics was at it’s finest.. The “Just Say No To Drugs” campaign in the mid-80s could not stop a new cheap, powerful drug. Crack-Cocaine was introduced. What a money maker. Who could forget CSU’s Kevin Mackey and the Brown’s Kevin Mack crack issues? It hit hard. Everyone. Color, income, class; it did not matter. CPD was working around the clock raiding spots. Gangs fighting over street corners to make that money. This played out until the early 1990’s. Things started to recover some. Terminal Tower was turned into Tower City in 90. Randall Park Mall was where everyone wanted to be until the gang fights ran people away. The court ordered busing to stop in 96. Go to your local neighborhood school. More people are out of work. Small factories closed. Huge industrial parks in town with vacant space. They make it cheaper in China. Housing boom and crash. If your heart pumped blood, you can get a loan for half a mil. Sign here. Still no real jobs. People lacking skills for the New World Order. A lot left behind. Old drugs are new again. People are still using. Not enough cops to make a dent to get the supply off the streets. Cocaine wars in Mexico has dropped the price to records lows. Watch out, that siding on your home might be coming off soon. They don’t care what you had to do pay for it. Oh, there is a shed that the railroad is not using any more. Little by little, it started to walk away, even the fence. I’ll remove that old crap from your home for cheap because I can dump it over there. Maybe there will be some railcars with some metal in them worth stealing when I dump. This will never end. The names will only change and the location in town. The city will be the city, always. And it will always be a little worse near the railroad tracks. Both sides are on the wrong side of the tracks in the heart of the city.
Posted by Boomer Hoghead at 12:24 AM No comments: