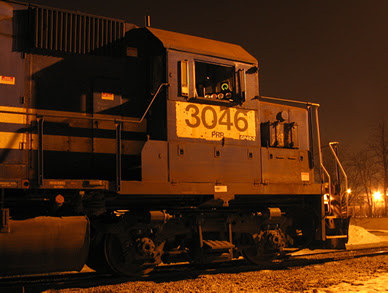 Recently here in Cleveland, Ohio, I have noticed a few new things on the Cleveland Norfolk Southern line. Somewhere there is a power plant that burns coal from the Powder River Basin region and it recieves coal from BNSF. These trains usually just run with 2 big units from BNSF and one from NS. The one from NS is required due to the cab signals on the line. This is great, I finally get to see some color in the sea of black locomotives. Well there is only one problem, the grades. From the Cuyhoga river to about Bedford ohio, the Cleveland line climbs up hill. There are twisty curves and a few of S-curves on this line that will bring any train to a grinding halt. Well, that is happened on one of these coal trains from BNSF. The charge was lead by a SD40 in CR blue and two BNSF C44-9W's locomotives. This was not enough power to keep things moving at the posted 25 mph nor 3 mph. After dropping from about 9 mph to a slow walking pace to a full stop, the heavy coal cars just sat there. I am not sure how they got this train moving at speed again.

NS runs other coals trains to points east on the same line. They usually put 3 big units on the head end and 2 units on the rear. Those helpers on the rear vary from gp38's to SD70's. Maybe NS should places those helps on the rear of these BNSF coal trains to help them make up from the grades.

Here is a link of the train mentioned aboved. http://clevelandtrains.net/emd710/temp/ns3.jpg